Brazil has some of the best coffee beans in the world!  In this article, we dig deep to find out more about Brazilian Coffee Brands and what makes Brazil one of the top producing coffee bean countries in the world.

One reason Brazil is at the top as a coffee bean producing country, is that they produce a little over 30 percent of all coffee beans world wide.  Although, if you can believe it, this is a drop from 80 percent of the world’s coffee beans a little under 100 years ago.

Those are crazy numbers.  No wonder Brazilian Coffee Brands can claim to be the best.  They’ve been owning this market for centuries.

The coffee bean species of Arabica and Robusta are the vast majority of bean varieties that are produced in Brazil.  This matches what occurs world wide with Arabica still being the big winner.

Since coffee beans are often grown towards the regions near the equator, you might think that the Amazon rain forest would be an ideal location for coffee bean farming.

However, this isn’t the case for Brazilian Arabica varieties of coffee beans.

And, even though a fair amount of Robusta is grown near parts of the Amazon rain forest, the region that does grow Robusta is still only a small percentage of the rain forest.

These Robusta coffee bean farms are located towards the south western borders of Brazil.

The regions of Brazil that have higher elevations provide the ideal soil and environment for growing great coffee.

Because of that, the Amazon just doesn’t provide that ideal culture for coffee bean farming.

Brazilian coffee brands beans are grown in the largest quantities in three southeastern states in Brazil:

São Paulo for the most part built it’s industry and richness on the back of the coffee bean industry.  They have been a huge supplier of Brazilian coffee brands for hundreds of years.

Minas Gerais is a sister state to São Paulo.  In addition to coffee bean farms, Minas Gerais has a booming dairy industry.

São Paulo and Minas Gerais are sometimes referred together as the “café com leite” states.  Or, the “coffee and milk” states.  So, these two have some great synergy.

The Brazilian state of Minas Gerais is almost twice the size of São Paulo, yet São Paulo managed to grow it’s business sectors at much higher production levels mainly due to coastal access for world wide exports.

Paraná is practically a suburb of São Paulo.  Primary growth in this region started on the coastal region of the state as São Paulo coffee business grew.

Eventually the northern part of Paraná was cultivated into coffee bean farms, again as a result of São Paulo growth.

With all of the different Brazilian brands of coffee beans that are available, it can be difficult to find the best.

These Brazilian coffee brands beans are all varieties that have pleased coffee drinkers everywhere.

See if you can spot our favorite. 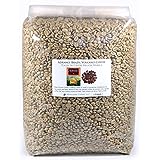 This unroasted Brazilian coffee brand comes from Pocos de Caldas, a municipality in the southern most regions of the Brazilian state of Minas Gerais.

This municipality is mostly made of high plateau’s formed from the surrounding mountains.

This becomes an ideal location for growing coffee beans.

This combination of coffee beans provides a very low acidity.  One reviewer reports “But one outstanding thing I noticed is that this coffee is very low to almost none in acidity, especially when compared with the Tarrazu Costa Rican coffee I previously had”.

The quality of these beans avoids bitterness even with a very dark roast.  This makes them especially great for espresso. 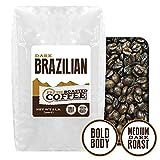 This medium dark roast from Fresh Roasted Coffee, considers itself to be environmentally friendly as a roaster.

With chocolaty and woody notes, Cerrado has a bold taste that should satisfy the coffee drinker that finds medium roasts a little to watery, but the darker roasts just a tad too bitter.

Cerrado was described in a review by easy drinker as “Dark Brazilian Cerrado whole bean Coffee has a very nice dark flavor that’s not overpowering or bitter.

It’s called a dark roast but it has an almost middle of the road flavor. But it certainly doesn’t have that medium roast flavor at all which I dislike.

It’s just not as strong as some other dark roasts. It’s especially nice for the price and I would definitely buy this coffee again“.

Move Over Kona described Cerrado Dark Roast as “Low acid, amazing bouquet, rich flavor and deep color all make it my bean of choice. I agree with the SIX star rating of others“.

Many others agreed that this coffee roast was very low with regard to acidity. 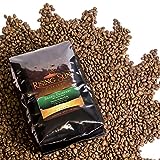 Peaberry, or sometimes known as caracoli, occurs when a coffee cherry has only one seed.

When there are two seeds, or coffee beans, the two seed grow towards each other and flatten out as the come together.  Most coffee beans will have this shape where one side is flat.

Many think that this shape is ideal for roasting as it lets the coffee bean roll around during the roasting process instead of getting stuck on it’s flat side.

Others just think that the effort of going through and selectively picking peaberry seeds (beans) makes the quality of these beans end up being a higher quality since they are being more closely inspected by the manufacturer.

Many reviewer report that the aroma that these coffee beans produce is simply exquisite! 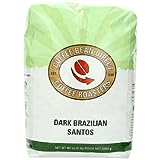 Almost 700 people have taken the time to write up a review for these coffee beans.

And, the verdict is:  Delicious!

Out of every 100 people, ninety six love these beans, and only 4 hate them.  There’s a bum in every crowd.

Coffee Bean Direct performs there usual trick of bagging the coffee beans within 24 hours of roasting.  So, you know you are getting a fresh batch just as if you roasted it yourself.

Except with this product, you don’t have to do the work, and you get a master chef that ensures the exact timing for the roast.

The label says “Dark”.  However, may reviewers say this isn’t too dark if you are adverse to a darker roast.

For example, reviewer AS Atwood described Santos as “This is described as a dark roast. I’d describe it as something like “full city roast plus.” It’s dark…but not too dark. The beans are just to the point of releasing some oils, but not full on oily”.

Read more information about Brazilian Coffee Brands and where they grow their beans in this article about coffee bean locations.

One Response to “Brazilian Coffee Brands”